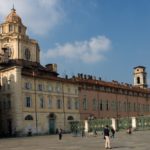 Half-day tour discovering Turin: the tour leaves from Piazza Castello, heart of the city, and includes a stop at the Royal Palace (external visit only), the baroque Palace of the House of Savoy, and at the Church of San Lorenzo, seventeenth-century masterpiece of the architect Guarino Guarini of Modena. In the latter, there is a photographic copy of the Holy Shroud, the most controversial and mysterious icon of the Christian world. Of great importance is Palazzo Madama. This palace defines the history of the city: from Roman gate, to Medieval Castle, to Residence of Christine of France and of Marie Jean Baptiste of Savoy Nemours, and in the end the first seat of the Italian Senate in 1861. 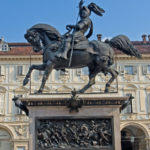 The tour continues to the Roman Theatre, Palatina Gate, the Cathedral of Saint John the Baptist, (the only example of Renaissance art in Turin), and the Chapel of the Holy Shroud ( outside visit only). On to Via Roma with its baroque Piazza San Carlo , masterpiece of Carlo and Amedeo di Castellamonte, at the centre of which rises “L Caval ‘d Brons”, monument of Emanuele Filiberto of Savoy, the duke who made Turin the capital of the duchy.

After a stop in one of the historic cafés of the square, we proceed to Piazza Carignano, to admire the Palazzo Carignano of Guarino Guarini, where the first king of Italy was born and where the first Italian Parliament was seated. 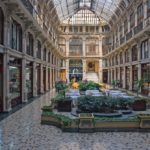 We then reach Via Po via the nineteenth-century Galleria Subalpina dell’Industria of the architect Carrera. After a few more blocks, we arrive at the Mole Antonelliana, symbol of the city, designed to be a synagogue and now site of the Cinema Museum.

Our last stop is in Piazza Vittorio Veneto with its view of the hills of Turin and of its two churches: Gran Madre di Dio and Santa Maria del Monte dei Cappuccini.