Excursions outside the city 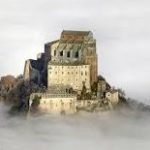 This massive structure is the official symbol of Piedmont Region. Located on Mount Pirchiriano, and dating back to the tenth century, it is a mix of both Romanesque and Gothic architectures. Three of its masterpieces are the Gate of the Zodiac, the Staircase of the Dead and the interior Church. A breath-taking view of the Susa Valley can be admired from its panoramic terrace. 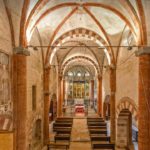 Avigliana and Sant’Antonio of Ranverso Abbey

Avigliana is a medieval town on the road that leads to the Sacra di San Michele (St. Michael’s Abbey). It is famous for many original buildings, among which are churches, towers, gates and the ruins of the Castle of Count Rosso. It is also known for its two lakes of morainic origin

The Church of San Giovanni houses altarpieces by Defendente Ferrari, while in the church of San Pietro there are remarkable frescoes dating from the eleventh to the fifteenth centuries. The church of Madonna dei Laghi ( the Virgin of the Lakes) overlooks the lake and houses works by important painters, such as Guido Reni and a copy of Caravaggio.

Sant’Antonio di Ranverso Abbey: not far from Avigliana you can visit this church/abbey which has its origins in the 12th century. Its Gothic façade dates back to renewals of the 14th and 15th centuries. Notable are the original frescoes attributed to Giacomo Jaquerio and a polyptych (multi-panel painting) of Defendente Ferrari from 1531. 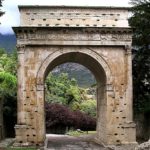 For millennia at the crossroads of the various transalpine itineraries between Italy and France, Susa has been characterized by considerable Roman and medieval monuments such as the Arch of Augustus of 9 BC, the Roman Aqueduct, the Roman Gate called “Porta Savoia” and the amphitheatre. The Castle and the Cathedral of San Giusto date back to the Middle Ages. The Diocesan Museum, located in the Church “La Madonna del Ponte”, is worth a visit. Susa was founded by a Celtic society and during the Roman period it was the starting point of the Via Domizia and Via Cozia, while during the middle ages it was a stopping place for the “Itinerarium burdigalense” and the “Via Francigena”. 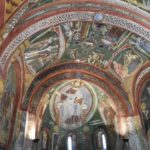 Located on the Via Francigena, still managed by Benedictine monks, the abbey of Saints Peter and Andrew, also known as the Novalesa Abbey, is an ancient Benedictine complex founded in the eighth century and located in the village of Novalesa, in Susa valley. One of the chapels of the complex houses two important cycles of frescoes dating the eleventh century. One cycle is dedicated to Sant’Eldradus and the other, among the first known in the West, to San Nicholas from Bari. 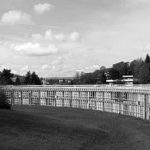 The city of Ivrea has ancient origins, still evident in its picturesque historic centre. The itinerary combines a guided tour of the ancient city with the discovery of the immense modern architectural heritage built around the Olivetti plant , that became a Unesco World Heritage site in 2018, and recently established as a museum. In February it is possible to attend the famous Battle of the Oranges, the climax of the celebrations of the historic Carnival of Ivrea.

On request it is possible to book a visit to the church of San Bernardino, in order to admire the fantastic frescoes by Giovanni Martino Spanzotti painted between 1485 and 1490. The story of the life and passion of Christ is narrated in twenty scenes. 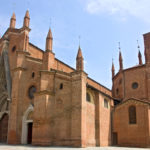 Tour of the city of Chieri and hills around Turin

Chieri is a medieval city full of surprises. Its Gothic and Baroque churches are evidence of a glorious past. The visit winds through the streets of the city, from Saint Dominic to Saint Philip, from the Arch to the Cathedral of St Mary of the Stairs, from the medieval houses to the hill of Saint George, where you can enjoy a wonderful panorama of the city. It is possible to have a tasting in one of the cellars on the hills, famous for the production of Freisa red wine.

At 35 km from Turin, on the hills of Chieri, visit of Don Bosco Basilica, the Biglione farm and the little home called Casetta. Possibility to have lunch at a typical restaurant. 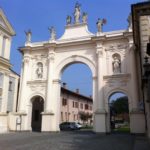 Visit of Cherasco and Alba

Cherasco was founded in 1243. It is a medieval city and it preserves its structure and buildings. During the visit you can discover the old buildings and palaces, such as Palazzo Salmatoris, the churches, the porticos and of course you have to taste the delicious “Baci di Cherasco” ( kisses of Cherasco),  chocolate and hazelnut nuggets.

Alba is a city of Roman origin, with many medieval traces . It is known all over the world for the white truffle fair held in autumn. The visit of about an hour includes entry into the Cathedral and a walk in the main streets where you can discover medieval houses and towers or nineteenth century architecture.